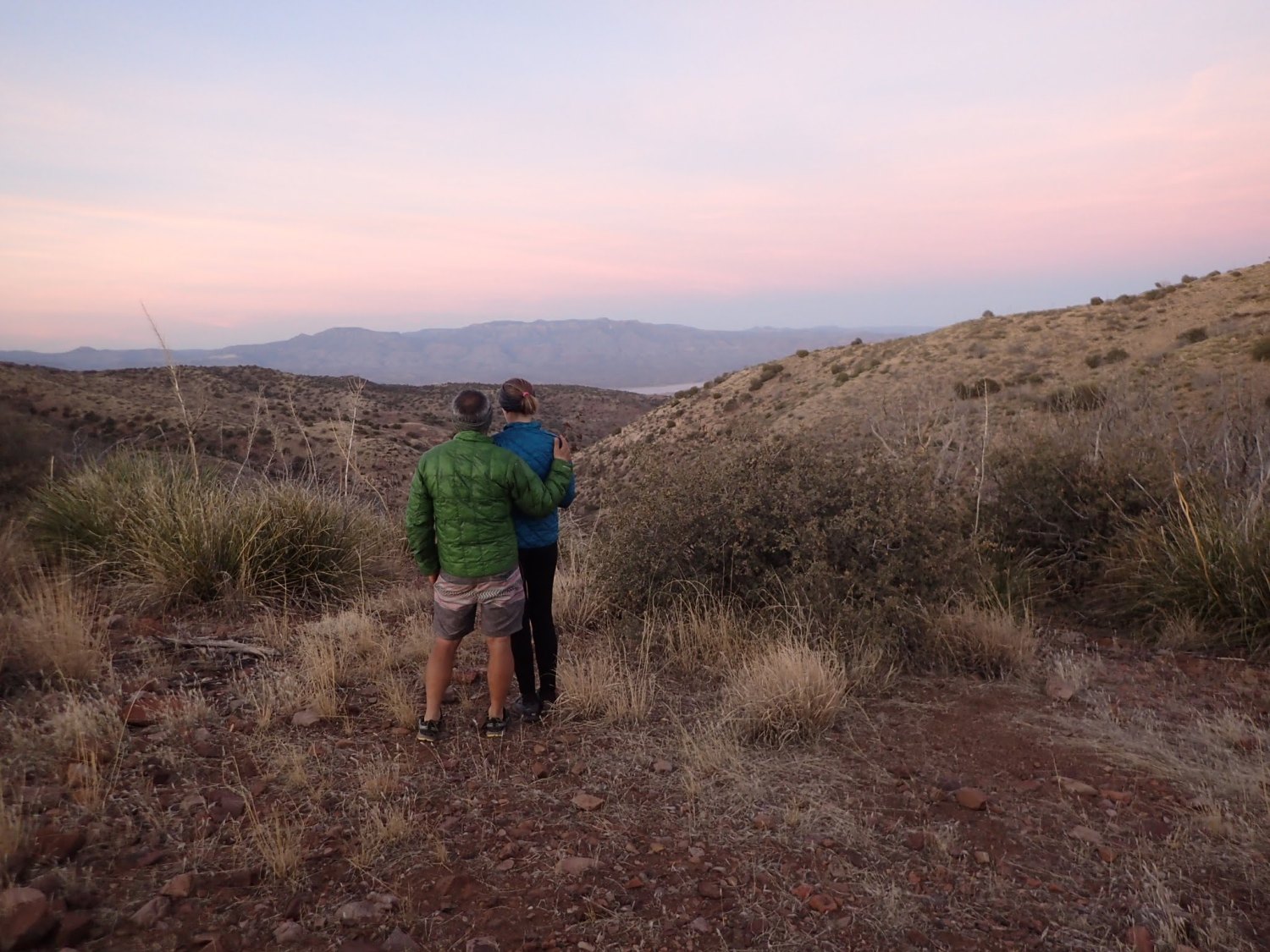 We’ve been itching to get outside lately, missing life on the trail. I was lucky to receive a backpack from Osprey to write a review for The Trek (a backpacking website I write for), so this gave us the perfect excuse to plan a trip on the Arizona Trail. If you’re interested, check out my review of the Osprey Eja HERE.  The AZT is a roughly 800 mile trail that traverses the state from the Mexican border to the Utah border. Unlike other long trails such as the PCT or the AT, which aim to follow one mountain range, the AZT aims to showcase the many diverse ecosystems in the state and visit a variety of different mountain ranges.

Our initial plan was pretty optimistic: 6 days of hiking to cover about 123 miles. However, we found the terrain to be tougher than we expected. In particular we were caught off guard by how rocky the trail was, how easy it was to lose the trail amongst the numerous intersecting cattle trails, and just how much hiking in the heat can slow one’s pace. By the third day we decided to reevaluate and slow the pace down a bit to have a more relaxed and enjoyable time. In the end we covered 85 miles over 5 days of hiking.

16.3 miles
We started at about 11 am at the trailhead near the Gila River just outside of Kearney, AZ. The trail roughly followed the river and railroad tracks with intermittent water access. For the first 3.5 miles we were joined by my Dad, his friend Pruitt, and my brother Kelly. It was hot and we stopped pretty often for shade breaks. We had planned a 13.4 mile day, but we reached the spot about 4:30 and decided to push on for an additional 2.9 miles to camp near the last spot to access the river before a 22 mile dry stretch. My feet have gotten soft, and I got a few blisters without realizing it. By the end of the day we were both a little sore, but nothing out of the ordinary for starting a new trip. At camp, Paul worked on gathering and filtering water while I made dinner. I put together a few new recipes, and was excited to try out some spaghetti for dinner. I burned it. As far as we could tell the recipe was promising, but could use some tweaking. Unfortunately it was hard to taste anything over the taste of burned sauce. It was probably the worst food fail we’ve ever had! The landscape was classic Sonoran Desert through the day: Saguaro forest, a variety of Cholla cacti, Barrel cactus, Paloverde and Mesquite trees. Birds included Phainopepla, Cactus Wren, Gila Woodpecker, Northern Cardinal, and Gambel’s Quail. We saw a small pack of javelinas and quite a lot of cattle.

22.1 miles
We slept in and started later this morning after 8 am. We climbed all morning, in the shade for awhile but eventually in full sun. The trail was winding and meandering. Very reminiscent of the PCT. We were moving kind of slow for most of the day. We stopped for a late lunch in the shade about 10 miles before our destination. We both felt much better after the break, the terrain got a little more lush and we got some shade and nice breezes. We carried 6 liters of water each out of camp today, as essentially the entire day would be without water. We actually did come across a stocked water cache around mile 16 and stopped to drink a little. I drank over 6 liters of water today. It’s dry and hot out here. Camped at a forest service windmill with water, near Hwy 60. We didn’t see anyone all day until we hit the trailhead during the last mile where people were camping. For most of the day we didn’t even see any cattle. This was probably the most remote portion of trail of this section. After our previous dinner disaster, we decided to stick to a tried and true recipe for the night: rice noodles in peanut coconut sauce. It was tasty as always. 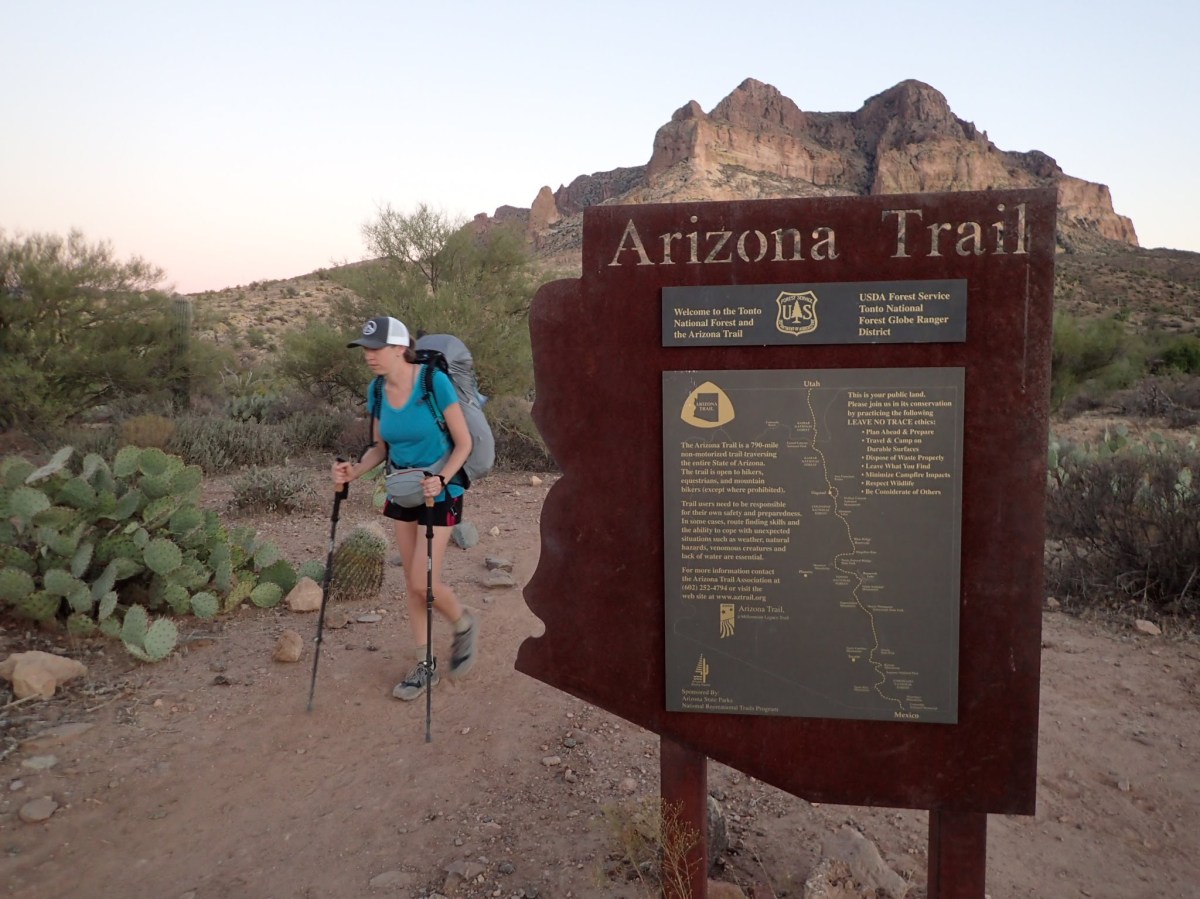 18.3 miles
We woke up early in the morning and left at first light. We had 15 miles of uphill ahead as we climbed into the Superstitions, the last five being the steepest. There was water 8 miles in. We made it to the windmill and water tank a little later than we anticipated, but enjoyed a break in the shade. There was even a table with logs for seats. We gathered 4 liters of water to carry out and drank plenty during the break. We hoped to reach the top by 2 and stop for a long lunch. It was hot and exposed. We lost the trail at one point and got very confused. The terrain was rocky and rough, and we were moving at what felt like a snail’s pace. We didn’t reach the top until 3, so we stopped for a very late lunch in the shade, feeling beat up. We decided to ease up the grueling pace, camp earlier than expected tonight and have 2 shorter days ahead to get to Roosevelt Lake by Saturday. This way we can maintain a less intense pace and actually enjoy the Superstitions. We found some unexpected water and decided to set up camp around 5:30. A nice little spot under an oak tree and a juniper tree. We saw a few day hikers out this morning, and a trail crew out this evening, but beyond that no other people out on the trail. We tried another new recipe for parmesan grits and both really enjoyed it. We’ll be adding that to the rotation on the CDT for sure.

13.4 miles (+2 off trail miles)
The day started off great, a cool morning walking through a riparian area. We took a wrong turn at a junction and were enjoying the walk so much it was a mile before we realized we had turned the wrong way. It was a little defeating for the start to the day, but we got back on track. We had a hot climb but when we reached the top we had entered pine forest. We stopped for lunch at Reavis Creek. Sitting in the shade near water, it was cool enough to put on my long sleeve. What a contrast to hiking in the sun. The afternoon was tough terrain: rocky, steep, and exposed. It was a crazy steep downhill followed by a crazy steep uphill. We kept checking to make sure we were actually on the trail, and not following some old cattle trail. We finally made it up to the ridge, got our first view of Roosevelt Lake, and found a nice tent spot under some juniper trees. Our campsite offered great views to both the North and South. We got to camp early, so we spent some time playing around with the camera and our new mini tripod, had a leisurely dinner and enjoyed watching the sun set. We tried another new recipe for dinner of parmesan mushroom rice. It was tasty but needed more flavor- mostly salt. I think with a little tweaking this will be a great addition to our dinner rotation. 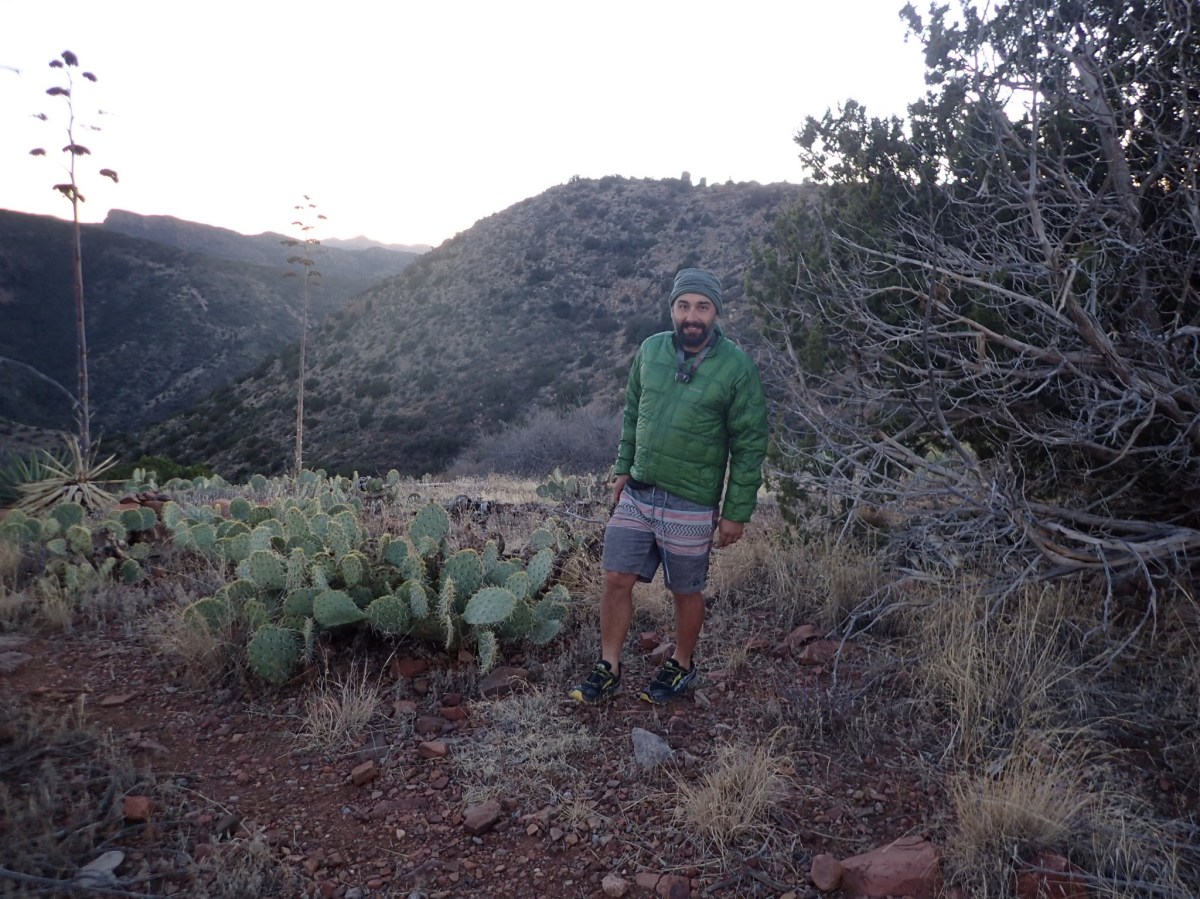 The night was chilly and so was the morning. Since we didn’t have too many miles or very much uphill we took advantage and slept in a little bit. We hit the trail around 7:30 to get the climbing over with before it got too hot out. Eventually we reached the edge of the Superstition Wilderness boundary and joined a dirt road. The rest of the miles would be on roads, but that didn’t make the terrain any less steep or rocky. We may have been going downhill, but it was steep enough to keep our pace a little slower than usual. We were impressed that people actually drive on these roads. Sadly, we saw a lot of litter on this portion of the trail, especially beer cans. When you have a car, why throw the trash out the window? It’s literally zero effort to take your trash back home with you. Paul stopped to pick up several items of trash but eventually we realized we couldn’t carry it all out and decided to be satisfied that at least we left the area slightly better than we found it. We made it down to Roosevelt Lake and Hwy 188 by about 2:30. We stopped at the ranger station for a soda and headed down to the Marina, where my Dad would be picking us up. Timing was perfect, he pulled up as we were walking down the drive. And he brought beer! A great ending to a great trip.

As always, the desert was humbling. We were reminded not to take our pace for granted, not to take a well defined trail for granted, and not to take water for granted. We had some miserable miles, but ultimately they were rewarded with wonderful riparian areas and sky islands. Nothing can make you appreciate a tree more than hiking for miles with no shade. Nothing can make you appreciate seeing water more than walking 15 plus miles without it. We hope to get back on the AZT sometime soon. We plan to complete this one by section hiking it.