*this post contains foul language, you’ve been warned
We spent nearly half a day trying to get back to the trail to return to the PCT. We finally got up to the trailhead in the afternoon, and started the ascent up Kearsarge Pass. Water was flowing over and all around the road at the trailhead, results of the massive meltoff we are in the middle of. The lower part of the trail was like walking in a stream, until eventually the trail became covered in snow again. We continued uphill over the snow, nearing the pass when Paul postholed and fell on the snow. There was a pause and then he started sliding. Unable to stop, he had no choice but to slide down to the rocks below. Because we were on a spot not particularly steep and the rocks were not too far down, he wasn’t hurt, but the experience was scary enough to say “fuck this.”
We sat on the side of the mountain with our friend Fredrick for about 15 minutes, debating once again whether we even wanted to continue. We are headed into much steeper territory, and the crossings are not getting lower as long as this heat wave continues. We agonized over what to do, and ultimately we decided to turn back, and Fredrick continued on. Truth is, we weren’t having fun. How many times a day are we willing to be scared, to do something dangerous? This year is unprecedented in terms of dangerous conditions in the Sierra. Wouldn’t it be more enjoyable to return in September and finish when the snow and water levels have subsided? It was still a hard choice, we shed a few tears, but we came out here to have a good time, not to take our lives into our hands three times a day.  We are now officially flip-floppers! ( A flip-flop is a thru-hike that isn’t in one continuous line. We’ll flip past this section, continue North to Canada, then flop back down and finish the section we skipped over heading South).
We camped out at the trailhead and returned to town the next morning. We met up with some friends headed to Reno, and decided to flip up with them. We spent the entire day trying to hitch in 100 degree weather, and finally gave up and contacted a local trail angel who agreed to drive us all the way to Reno for $60 per person.
One of our friends went to college here, so we camped out in his friend’s backyard the night we arrived. Then we got a casino hotel room for $18 per person! We are taking advantage of free drinks and casino buffets before we head back to trail on Tuesday. We will be starting near Truckee, where the snow levels are much lower, and heading North through Lassen Volcanic National Park. The heat is still continuing so hopefully as we hike North, the snow in Oregon will be melting and conditions improving.
We are still sad to be skipping ahead. The Sierra are still doable this year, but they are just very dangerous. (12 confirmed deaths in the Sierra this year already, though no PCT hikers thus far). But the terrain was more mountaineering than backpacking, and we came here for backpacking. We came to have fun. We are ready to get back out there and hike on dirt.

Here’s a photo of 5 hikers full of regret after attacking the AYCE buffet: 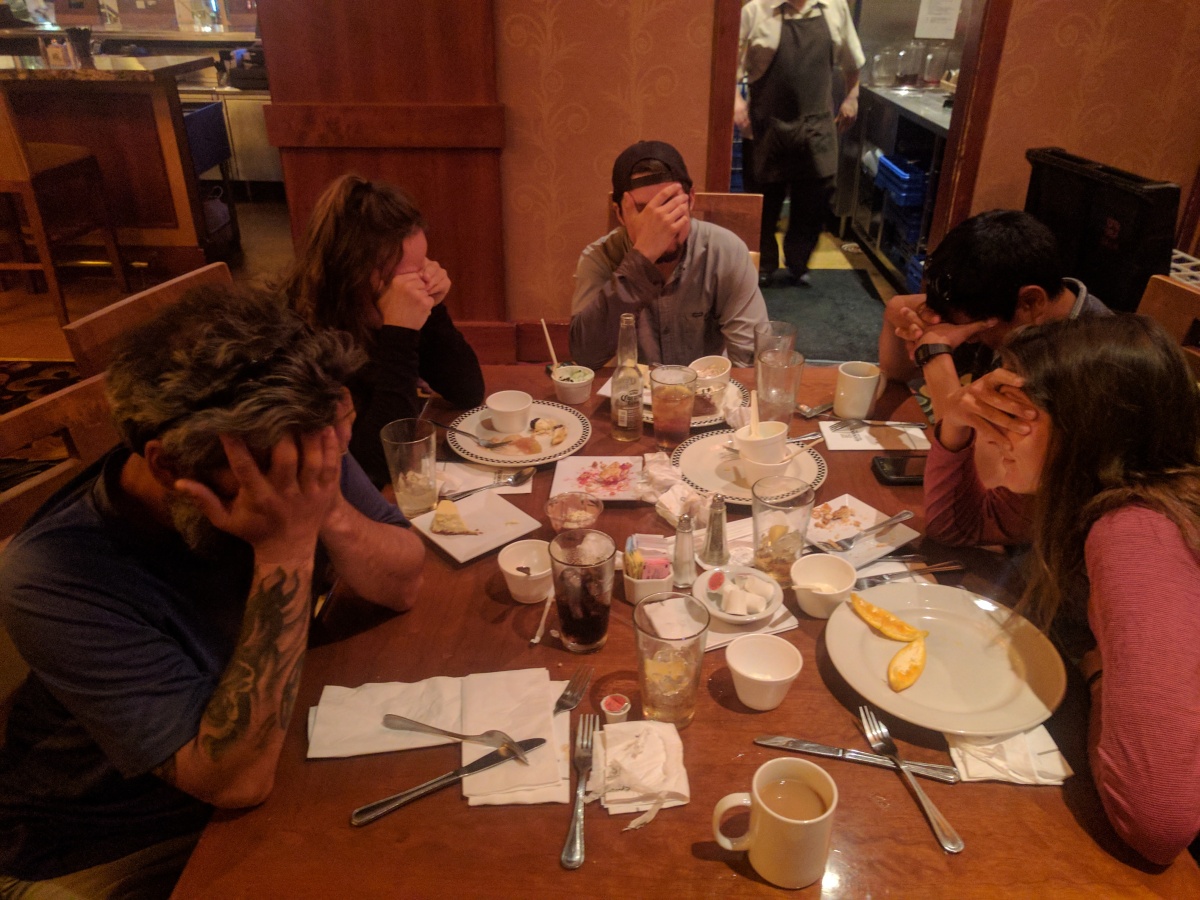