This article originally appeared on The Trek, which you can find HERE.

Thru-hike resupply planning can be daunting. Where to send packages, how much food to put in your boxes, and timing your arrival to a post office with limited hours is hard to figure out beforehand. There’s a lot of information out there about where to send boxes, and for the most part, I agree with the advice. However, my husband and I still made a few expensive mistakes. As our shipping costs accumulated, I began to wonder if shipping boxes from home was even saving money at all.

Fortunately, we kept track of our costs on the trail, so I was able to analyze just how much it cost to ship from home, to ship ahead from the trail, and to buy along the way. I learned a lot of lessons about how we could have saved money if we had made a few different choices, and I’m here to share them with you. Here’s a breakdown of what we sent and where, how much it cost, and most importantly, what we would do differently if we were planning the PCT again. 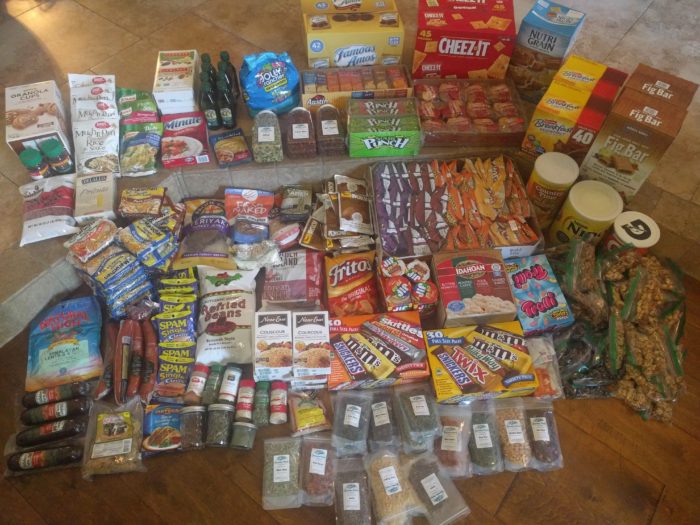 We followed the most common strategy for PCT hikers: Send some boxes to ourselves at specific locations, and purchase the rest of the food along the way.

Before we left for the trail, we packaged eight boxes to mail from home. We sent these boxes to locations we knew had limited/expensive resupply options. The plan was to send those boxes to the following locations, from South to North: Warner Springs, Agua Dulce, Kennedy Meadows, Independence (Kearsarge Pass), Vermilion Valley Resort, Sonora Pass, Sierra City, and Belden.

You can read my post detailing our plans before we left HERE. 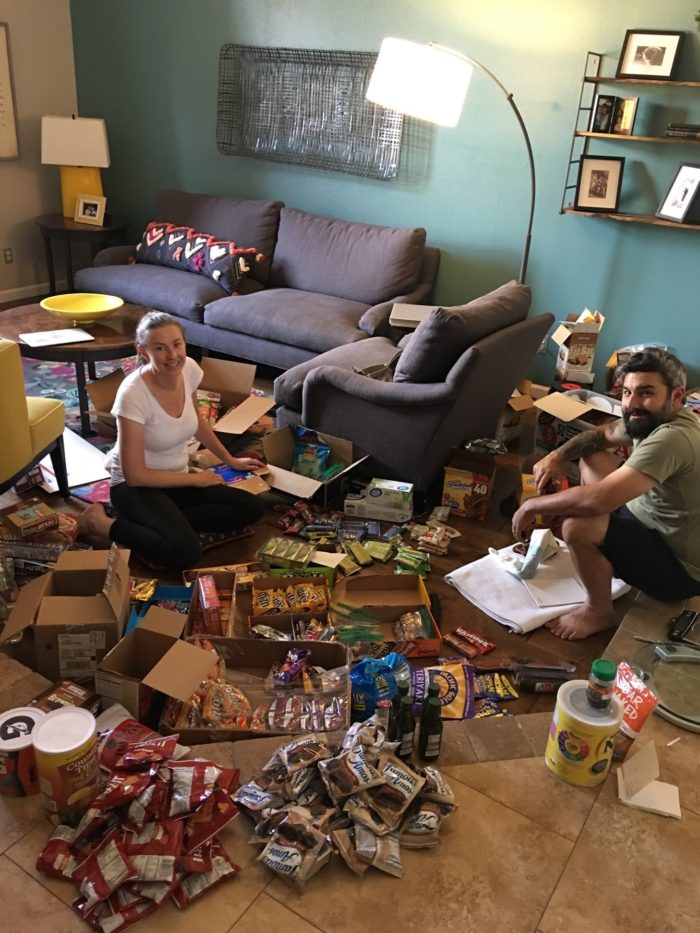 Things went according to plan until we decided to flip-flop after Kearsarge Pass, and return to the Sierra at the end of the hike. We had already sent our boxes to VVR and Sonora Pass, so I contacted both businesses and asked them to hold my packages until September. We then skipped ahead to Donner Summit with plenty of extra food in our packs, so we no longer needed to resupply at Sierra City or Belden. We shipped one box to Burney Falls, and another to Shelter Cove.  As we reached the end of Northern California and the beginning of Oregon, we found our pace was faster than planned, so my sister had to rush our last package. It cost over $100 just to ship! We ended up not shipping from Ashland since we still had a box from home to send to Shelter Cove.  We did shop and ship from Portland as planned.

Our original eight boxes contained about 40 days of food. Our grocery costs came to around $350.  Unfortunately, the shipping costs for the boxes totaled up to $345!  Still, our food costs including shipping came out to about $8.50 per person per day.

While we were in Portland we went to WinCo and spend about $240 on groceries to resupply and fill 3 boxes to send through Washington.  Shipping costs were only $68 for these 3 boxes.  Food costs came out to about $7.35 per person per day.

Most of the trip, we resupplied along the way in trail towns.  The cost of resupply along the way came out to $9.70 per person per day.

I was surprised to find that even with some crazy shipping fees, it still came out cheaper to send boxes from home than resupplying on the trail.  However, shipping ahead from the trail was drastically cheaper.  It was easier too!  No coordinating with a person from home, no stressing about whether our packages got in the mail on time.  If we were to hike the PCT again, I think we’d still send boxes to the same places, but we’d approach it differently.

What We Would Do Differently 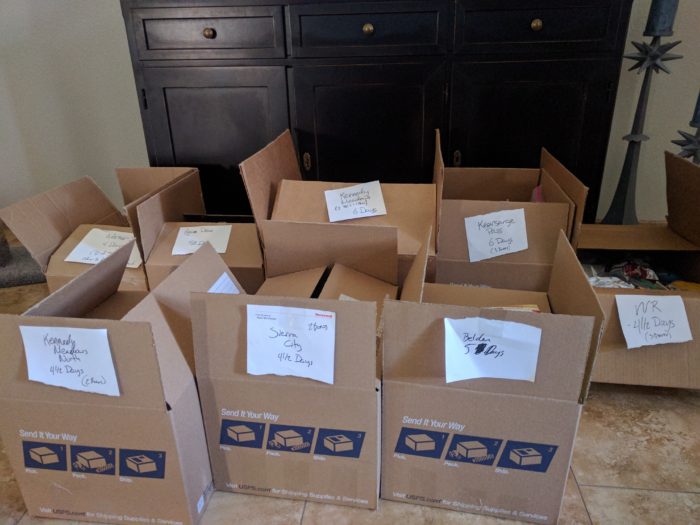 At just over 100 miles in, Warner Springs sees a lot of hikers.  Most of these hikers are eating less than they had planned, and most hikers also send a box there do to the limited local market. Therefore, the hiker box was massive, and not just made up of instant mashed potatoes and oatmeal. Trail mixes, dried fruits, tortillas, peanut butter, even candy.  I wouldn’t depend on it for a full resupply (though I saw at least one person resupply entirely from the hiker box), but I would definitely send myself less food here, and then utilize the hiker box if I felt we needed more food.

Because our boxes were sent from Arizona, shipping started out reasonable and got more expensive as we moved North.  As our plans changed, it was stressful to coordinate where to send the boxes, and due to some miscommunications we had to pay for a rushed package, which cost more to ship than the food inside it. If I were to do it again, I would send 3 boxes from home, and no more: Warner Springs, Agua Dulce, and Kennedy Meadows.

3. Send a box to Bishop, not Independence

Sure, Independence is closer to the trail.  I thought that it would be easier and faster and we wouldn’t have to deal with a 40 mile hitch to get to Bishop.  Here’s the thing: there’s nothing in Independence, and the Post Office has extremely limited hours.  If you want to stay the night in town (and you will), then you will be going to Bishop anyway.  It’s a fun place, and the Hostel California is the best hostel on the PCT.  Go to Bishop.  The hitch is easy. (Some people heard bad things about the hostel last year, which was really just that everyone there had been through some shit, some had near death experiences, and people were deciding how to proceed, so the energy wasn’t the greatest.  We returned to the hostel at the finish of our hike and had nothing but fun times).

Tehachapi has big grocery stores, so you can resupply cheaply there for the Sierra and send the boxes ahead and still have plenty of time to ship the boxes.  I’d send a box for Bishop, VVR and Sonora Pass from Tehachapi, rather than from home.  I would still send my Kennedy Meadows box from home, because it would be cutting it too close to ship it from Tehachapi, and because I had some gear from home to send to Kennedy Meadows anyway, like most hikers.

SLT also has large and affordable grocery stores.  I’d send a box to Sierra City and/or Belden from here, rather than from home.  Picking up a box at Burney Falls saved time because it is right on trail, but not necessary because you could go into Burney to resupply at the grocery store.

6. Send a box to Shelter Cove from Ashland

7. Send one day less food in each box

Sending too much food means carrying extra weight or getting rid of some of your food, which is just wasting money.  If you sent too little food, chances are there is a hiker box nearby that you can raid, or you can buy some snacks to supplement your package.  Everyone says to put less food in your boxes, so I’m just joining the choir here.  Put less food in your boxes.

Sure, this isn’t exactly a “resupply” cost, but we spent more money eating out that we did on our entire resupply!  That was partly due to our flip-flop, which involved about 10 extra zero days and all the hotels and travel associated with it. But town food is irresistible, and it’s easy to spend a lot in town, especially if you add beer to the mix. After looking at the cost of eating out, I think I’d make more of an effort to be frugal in restaurants next time around. 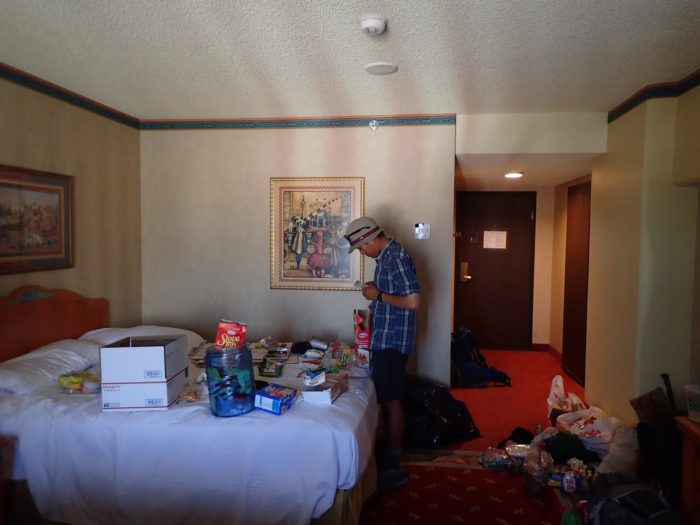